Roosevelt Island lies between the east side of Manhattan and Queens. It is a long strip of land only accessible from Manhattan by tramway, a bright red cable car that takes you from 59th Street and 2nd Avenue across the East River, alongside Ed Koch bridge and deposits you safely on to Roosevelt Island. We’ve been curious about Roosevelt Island since we arrived here as we can see it from our apartment and can just about see the cable cars making their way high up in the sky. So on a glorious sunny day, with blue skies and my new sunglasses (looking good) we ventured to the island.

The island was originally called Welfare Island but renamed in the 1960s as a tribute to FDR who was Governor of New York from 1929 until he was elected President in 1932. This is not your typical tourist destination and it’s unlikely you’ll find it in the top ten of things to do in New York, but it does now host the newly opened Franklin D. Roosevelt Four Freedoms Park. FDR died in 1945 but this memorial didn’t open until October 2012 after a decades long history of failure to develop the land and get the financing in place. However now it is open and it is glorious. It’s a beautiful simple grey stone development at the southern end of the island. When you reach the edge of the site you stare down the East River, with the Manhattan skyline on your right, the United Nations building standing proud and the Chrysler Building and Empire State Building peeking through the crowded parts of midtown Manhattan. It is a simple and fitting memorial to a great man and over time will become more well known and popular. It is free to visit and with a ride on the tramway there’s a real incentive to go there and get a different view of  New York. 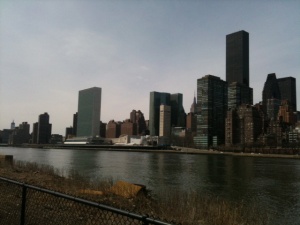