A glorious sunny day and I take J to Battery Park. This is the park at the very tip of Manhattan, the place where everyone goes to get their boat out to see the Statue of Liberty. It is rammed with tourists but poor old Battery Park is still looking worse for wear many months after the devastation of Hurricane Sandy. Much of the park is cordoned off but there’s lots of activity going on to reconstruct it back to its former glory.

The park is host to many statues and at least two war memorials. The memorial to those who died in the Korean War (1950-53) is relatively new, having been erected in 1991 and is impressively modern. We were there for some time and very few people wandered over to this corner of the park, which was a shame, because it’s very thought provoking and a close look at the flags at the base of the memorial reveals some intricate mosaics.

I was so impressed I wanted to share it here. The first photo is the actual memorial, which is huge, you can tell from the size of the surrounding trees. Then below I have photographed three of the many paving slabs which come out from the memorial, like rays of a sun, to show how many countries were involved and how many men died, were wounded and those who were missing. The numbers for the US and for Korea are way in excess of anything I would have guessed. 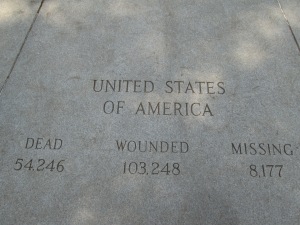