Just for today, though. Today I was a volunteer marshal at the New York Marathon! This goes so close to our house, so it seemed rude not to. What an amazing event. 47,500 runners who were about two thirds of the way through when they came past me.

I saw the amazing wheelchair racers, the elite women – by in a flash – and the elite men, pounding up the road. And then followed by thousands and thousands of runners in every colour under the sun. The early waves of runners were serious, focused and uninterested in the crowds. The later waves sought out applause and ran alongside the barriers, high fiving everyone as they went. People with names on their tops had their names shouted out in encouragement by complete strangers in the crowd.

The crowds on my block were super loud and excited and must have hugely motivated the runners. Not so many crazy costumes in this race; I saw Cleopatra, Elmo from Sesame Street and a few crazy wigs. I shouted encouragement, clapped a lot and removed rubbish from the road, including many bananas, not wanting any comedy slip ups. It’s a huge privilege being able to stand in the road as a volunteer and get so close to the action.

After standing from 830 until 230 in the afternoon in the Arctic blast of the cross streets, I was ready to wander home for a cuppa. What a great day! 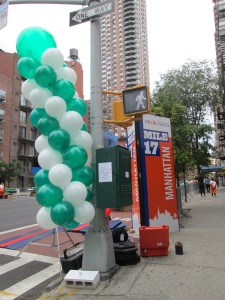 Mile 17 before the masses arrived.

Elite women – the first two and quite a while until the others came by. 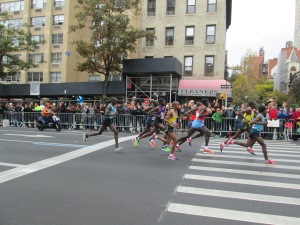 The masses and the mess: the green squares are soggy sponges.