Because it is so cold still, I continue to try and to find new and interesting things to do indoors with J, who is now 2 and 3 months. I’ve taken him to the Cooper-Hewitt, National Design Museum a couple of times now. It hosts free toddler classes but they are in Harlem. The actual museum is on 91st Street at 5th Avenue, where it is housed in the enormous, grand mansion that was originally built for the philanthropist, Andrew Carnegie. It’s a beautiful site undergoing massive renovation and is due to re-open later this year. In the meantime, it has moved its educational activities to a modern space on 110th Street overlooking the north end of Central Park. The contrast between the two locations couldn’t be any more stark. Even at 91st Street, 5th Avenue is smart and the park well used. Go up another 20 or so streets and you are in Harlem proper. It feels different and looks different with the large, daunting correctional facility looming over the newly refurbished playground in the park.

This end of the park is also home to a huge statue of Duke Ellington. I am embarrassed to confess I only noticed it today – not sure how I missed it as it’s got to be 30 feet tall. He stands proud on the north eastern corner of the park, in the middle of a roundabout. He stands next to his piano and looks like he’s commanding the traffic going down 5th Avenue. Underneath the plinth he stands on are a number of naked ladies who hold him in place.

I’m sure in the summer it looks good, with the trees in their full green finery, but ultimately this isn’t a great area and not one you’d see any but the most dedicated music enthusiast visit. It’s not one you’d want to hang around in, anyway. Here are some pics from three different vantage points, whilst I was trying not to be run over or lose J; they should give you an idea of the size and setting and to save you the trip. 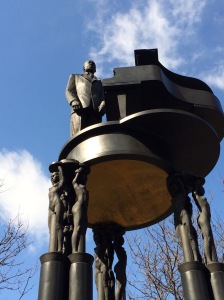 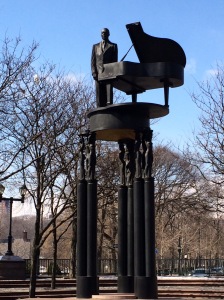 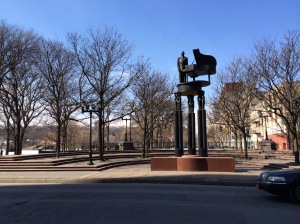 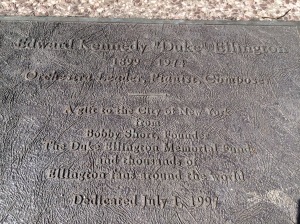