Continuing with the cold theme from yesterday, E and I went ice skating in Central Park last night. There’s a permanent rink at the south end of Central Park which is re-used in the summer as a small fairground. We went to the fairground in August on a roasting hot day where I sought out shelter at every opportunity and guzzled bottles of water; this time round I’m freezing and gripping a cup of Early Grey tea to try and restore some feeling in my fingers.

The setting is spectacular: the buildings of 59th Street towering over us and the trees of Central Park nearly bare of leaves. It’s kind of spooky walking into Central Park at night; E wasn’t keen and I sort of knew where I was going after an abortive attempt to cut through the Zoo, which was unsurprisingly shut at 630pm. But we survived and it’s well worth it as a proper New York experience, something everyone should try during the winter. 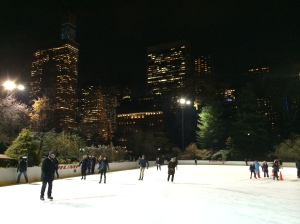