And the third in a series of posts about our day out to the Lower East Side. This time it’s about the mysterious building on the corner of Bowery and Spring Street. We went by it on the way the Pickle Day and stopped short to gaze up at this graffiti clad vast old building that was once a bank. You can see from the pictures below that in its day it was very grand and imposing. The front steps retain their iron gates and the pillars are grand and imposing. The graffiti is awful.

I was intrigued. What on earth was this place. As usual, the Internet turns up the answer pretty quick. It was the home of the Germania Bank, built in the late 19th Century. The area was home to a large German population at the time and I’m sure it would have been as imposing then as it is now. Incredibly it is the home of one family, the Maisels. Jay Maisel is an artist who bought the bank for $100,000 in 1966 and has lived there ever since. He uses the space for his own art and has rented it out to other artists, including, impressively, Roy Lichtenstein. There’s a really good article from 2008 in New York Magazine, so I won’t go into any more detail here. Read it, it’s really good and the pictures are great.

As for Mr Maisel, he says he gets approached by real estate agents all the time and he has had to put a website up called 190thebowery.com to try and stop them as he has no interest in selling. New York Magazine asked agents to put a price on the 30,000+ square foot building. These topped out at $50 million and that was five years ago. New York is in the grip of a property boom right now, so heaven knows what those estimates would look like now.

So why doesn’t Maisel sell and realise his investment all those years ago? ‘Where am I going to live? A three bed apartment?’. Fair point. Not sure I’d fancy it, he and his wife have to clean up the sidewalk every day as they are responsible for it. Doubt that’s a pretty sight after a Saturday night. 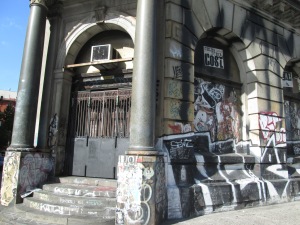 I quite like reading about New York history, how areas have evolved over the decades and the personal stories that come with this. The Museum of the City of New York is a great place to indulge this and it, housed in its grand building on 5th Avenue way up on East 103rd Street, does this with great aplomb. I highly recommend a visit if you’re ever here. Reading the New York Times this weekend, I found a heart warming article in the Metropolitan section, which focused on one house in the little known area of Crown Heights, which is in Brooklyn. The article tracked the house move of the current owner (selling for $1.3 million) and recalled the past by digging through city records to see who had lived in this grand, turreted building. It was the best thing I read this weekend and well worth a look. It’s not all about Manhattan, it seems.

When we left NW3 the property market was mad. House prices just kept going up and up and most flats in the area were going for well over 1,000 pounds per square foot. It was unaffordable to many but very attractive to a lot of foreign money, with many overseas buyers looking for havens for their spare cash. I still subscribe to a few estate agent websites and see the jaw dropping prices of flats near where we used to rent in NW3. It comes as no surprise then that New York is pretty much in the same position: little inventory, lots of demand. There was a front page article in the New York Times yesterday about this. Property selling works a bit differently here. The buyer has an agent and the seller has an agent. So often the buyer and the seller don’t even meet, it’s done through their representatives. Open houses are common, with the seller’s agent arranging viewings with the brokers representing the buyers. The New York Times article talks about 100 buyers crammed into open houses for one bed flats; with dozens of above asking prices offers; and the level of all cash buyers is stunning. It’s  a crazy world. I’m so glad we aren’t buying here.

Ah yes, Location, Location, Location, the UK property show that promised you a predictable hour of entertainment. British couples who want a property, can’t decide what they really want, look to Phil and Kirstie to guide them on their way. They see a terrible property, a not so terrible one and after a few more ups and downs and the mandatory flirting between the two hosts, they find the home of their dreams. Safe, predictable evening TV from Channel 4.

And do we have that here? Err, no. we have Million Dollar Listing: New York. A fabulous catty programme that focuses on three different real estate agents as they try to make as much commission as possible by selling incredible multi million dollar apartments. The agents all hate each other and do whatever they can make the deal and there’s high camp drama all round. I love seeing the seeing amazing properties that look like they came straight out of a magazine and of course seeing all the streets of New York. It’s mostly focused down town in areas like Chelsea and Tribeca, with occasional trips uptown. It’s brilliant. It’s great entertainment. Watch it on-line and become addicted.

Yes, it’s true. 432 Park Avenue, currently under construction, will have a penthouse which is already under contract, for $95 million. Wow.  6 bedrooms, 7 bathrooms. You can see here how completely enormous the building is in comparison to everything else in Manhattan. Claims it will be the largest building in the Western Hemisphere when it’s done.

Highlighted on the front page of this morning’s New York Times, the 84 storey building will be part time home for the international billionaire set, adding it to their property portfolio.Their housekeeper can live in a studio apartment in the same building for a mere $3.9 million.