That’s Eric Carle, author of many, many children’s books. I have lost count how many times I have read the Very Hungry Caterpillar or the Very Busy Spider. So I was very excited to be able to go to a book signing by the man himself earlier today. But I couldn’t, because the queue was so long, they weren’t permitting anyone else to join it. He was signing his new book at the New York Public Library, the famous one on 42nd Street and 5th Avenue. There were hundreds of people there and a lot of very bored children.  I did catch a glimpse of Eric and took a snap, which you can see below, but it’s not very close, so imagine it’s an old man with a beard in a hat. Such a shame not to actually get our books signed and say hi, but we did get to go back into the “ABC of it: why children’s literature matters” exhibition, which is even better second time round. 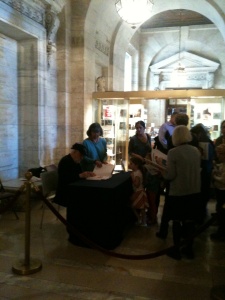