Barneys is a high end department store on 5th Avenue. It’s pretty flash, bit clinical inside, but seems to be pretty popular. Like all its competitors, Barneys has revealed its Christmas window displays. Having perused them all this weekend, they take the award for the most amazing windows. Well, one window in particular. They have constructed a viewing room on the pavement so that you are in pitch black when you look at the window. The display is 3-d and shows a kind of utopia of the future, buildings kind of floating in a sea of black. Accompanying the changing display is the music of Shawn Carter, also known as Jay-Z, also known as Mr Beyonce. And he wasn’t swearing. 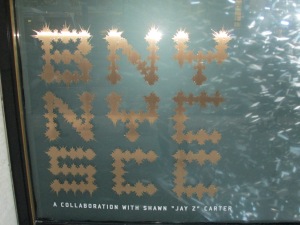 So, imagine you are standing in a freezing cold black room with a bunch of strangers, having just stepped in off 61st and 5th Avenue and you are looking at the image changing over time. The pictures came out surprisingly well, but they don’t tell you anything about the movement, as this is entirely animated. But, hey, the images are amazing in themselves. So put on on some Jay-Z  and enjoy.