It’s Labor Day here in the US (yes, it does look weird without the ‘u’). It’s basically a late summer bank holiday and is often cited as the unofficial end of summer. And it seems that this is the day that lots of people return to NYC after summers spent in the Hamptons and other exotic Long Island locations. It’s all very Revenge, if you’ve ever watched that ridiculous but compelling TV programme.

I made a quick visit to Fairway and it was packed with people stocking up and the queues snaked around the store. I have a love hate relationship with Fairway, as I struggle to come to turns with their uneven customer service, but today they coped superbly with the queues and I sped through. The British section was eerily quiet but full of Walkers Prawn Cocktail crisps, which have gone up from 99c to $1.19 since we started buying them, I think we forced the price up all by ourselves. I mention this because it has a new sign, which was hard to photograph because the aisle is narrow, so I will transpose the text below if you can’t quite see it. It’s great:

“A Union Jack here would be trite. And Pandering. We’re above that. Suffice to say here are the icon staples of British life that we import way out of our way to sooth the savage beast who thinks we’re just a bunch of heathens.”

I couldn’t get the picture of the Union Jack painted sports car on the right hand side, which is possibly British made. 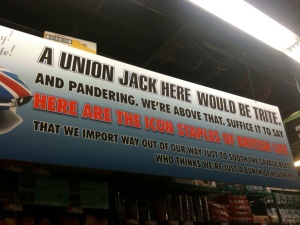