It’s been an interesting time of contrast for me in the last couple of weeks. I had been keenly anticipating visiting two particular exhibitions, one on the 100th anniversary of the famous Armory Show of 1913 and one of the writings of Edgar Allan Poe. Now that I write it like that, it does sound a bit dull, but they weren’t. Honest.

Please excuse poor quality of photos here, both taken surreptitiously as cameras were banned. The one below is of the original 1913 poster for the show. 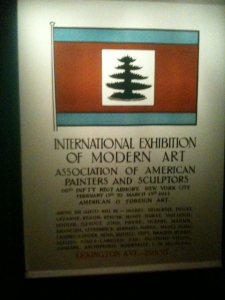 The New York Historical Society is on the Upper West Side, it’s next to the American Museum of Natural History in a grand building overlooking Central Park around 77th street. I’d not heard of it before I came here, but when I read about the exhibition I was excited to see it. I wanted to learn about how Americans viewed art from Europe when it was exhibited here for sale for the first time on the eve of the First World War. It was the first time mass audiences had seen artists like Van Gogh, Gauguin and Duchamps. Art that didn’t look like real things or real people was pretty radical back then. It’s a great exhibition and the catalogue is a monster at over 500 pages, weighing a tonne just for the paperback. Out of around 1300 works only 250sih were sold at a value of $1.6 million in today’s money. Incredible.

Further downtown is the Morgan Library and Museum. Again, not really on your tourist trail, but hugely accessible from Grand Central Station or Penn Station and on a glorious block on prime Madison Avenue at 36th street. The one-time home of Pierpoint Morgan, financial whizz and owner of great wealth, he was a voracious collector and amassed an enormous and eclectic collection of art, literature and artefacts from all over the world. Subject to a recent refurbishment, the Morgan Library and the modern building that now surrounds it are well worth a visit.

I spent a good hour looking at the Poe exhibition and whilst small, it was filled with his original writings mostly drawn from the Morgan collection. Seeing how neat his writing was made me realise what a lost art penmanship really is today. Reading Poe’s most famous poem, The Raven, in the original newspaper that it was first published in is a real treat. Seeing a letter from Charles Dickens, his contemporary, writing to him about his work gave me a real thrill (the manuscript for A Christmas Carol is currently on display as well). You’ll need your glasses to read this lot as the room is darkly lit and the walls a rich burgundy colour adding to the gothic theme.

That’s my amateur review but actually, what I really want to share is how different these places are in terms of customer experience. The New York Historical Society is full of security guards who ignore you and look sullen and make you feel uncomfortable. Their policy about bags is laughable and the abuse the cloakroom staff were taking for not letting hand bags in was fairly unpleasant. For the Armory Show they don’t even let you take a buggy in – but you can take your marauding 2 year old with you… I didn’t, but let’s re-think that one, NYHS.

Let me contrast this to the Morgan Library. What a delight. The staff are lovely. They greet you with a good morning and they are incredibly helpful but understated in their presence. The ambience is welcoming, the building beautiful and light and filled with fabulous treasures from the Booker prize exhibition, showing how book design has changed since the 1960s, to the drawings of Da Vinci, to Venetian glass, to Poe.

Poe wrote about a Raven and its constant refrain of ‘nevermore’. For me, it’s more Morgan and nevermore NYHS.