Ah, what a great headline on the front page of this week’s New York Observer. ‘Dems brace for an all-perv ticket’. This is reference to two politicians here who have recently tried to resurrect their political careers after some rather dodgy behaviour in their recent pasts. Anthony Weiner is a former New York US Representative who resigned after he sent sexually explicit pictures of himself via Twitter to one of his followers. He is now, two years on, trying to get the democratic nomination to become Mayor of New York and giving Christine Quinn a run for her money. He is also interesting because he is married to Huma Abedin, who is a key aide to Hillary Clinton. There was an article in the New York Times Magazine earlier this year about them, which is worth a read, if you’re interested.

And just this week Eliot Spitzer, former Governor of New York, also put his hat into the ring for the race to become Comptroller of New York State (the chief fiscal officer of the state, responsible for pension funds and payroll amongst other things). His controversy stems from 2008 when he had to resign the Governorship after he was found to have a bit of call girl habit “costing him tens of thousands of dollars in legally questionable transfers” according to the New York Observer. I’m not entirely sure that’s a great CV for a finance post. The Huffington Post confirmed that he had got the required number of signatures to get on the ballot for the democratic primary in September, so someone obviously thinks he can do the job. It’s a hilarious part of this year’s elections and I’m sure will have plenty of food for the headline writers as we get closer to voting day.

What a great idea, a swimming pool on the top of a high rise building. Not something you’d see much of in the UK, but here in New York I thought there would be loads as it gets very hot in the summer. A funny piece by Gerald Eskenazi in this week’s New York Observer tells me that there are only 15 outside residential pools in New York. I am surprised.

How about something like this in the middle of NW3? Not sure the locals would approve! 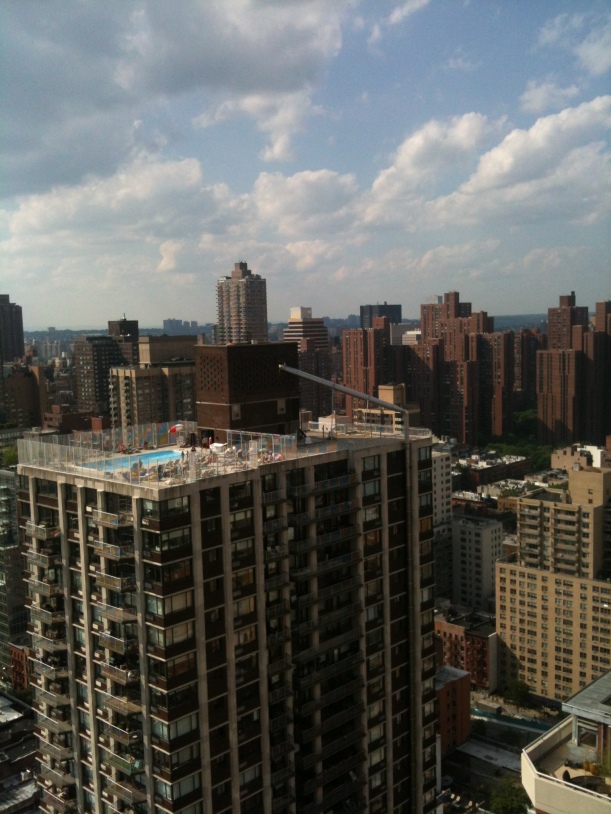