This is what I was doing earlier tonight as I got out of the subway at Wall Street. In the dark it’s very hard to read street signs and there’s no logic to the street layout down town – the logic of the grid system is far north from here. I was squinting like a very old lady and looking as bemused. In a bid to not get mugged, I huddled to look at my phone and work out where I was but that was hopeless too as it was too hard to see such small print. I am getting very old, I must update my contact lenses.

I then stumbled across the New York Stock Exchange building which looked amazing all lit up at night. 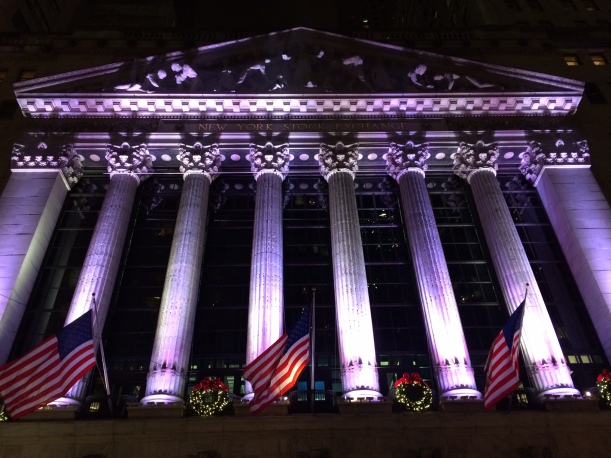 So I have decided that the episode of Sex in the City where Carrie gets on the subway because there are no cabs and where she emerges at Wall Street station (not sure which line, but let’s say it’s the 4 5 line) is completely unrealistic. I don’t see how she could have oriented herself and got herself the the Stock Exchange Building to ring the bell in rush hour in her enormous Laboutin or Blahnik heels. No way. I was wearing fur lined Camper boots and I had no idea.

It’s so cold again, that being on the street that marks the original wall of Manhattan where in the 1660s New Amsterdam originally ended, just reminds me of Game of Thrones. But that’s another terrible TV reference that R says I should stop doing. But I can’t; it makes me laugh. Better than wailing.

Well, that’s how it felt when we landed in Dumbo and couldn’t find the end of the Brooklyn Bridge. How’s that for a bizarre sentence? Dumbo is a district of Brooklyn, so called because it’s Down Under the Manhattan Bridge Overpass. Sounds attractive, eh? It’s surprisingly nice. We took the East River Ferry from 34th Street and chugged our way down to Dumbo, which seems to be more under the Brooklyn Bridge than the Manhattan Bridge, but Dubbo isn’t quite so fun sounding. There is a beautiful restored 1922 carousel called Jane’s Carousel, where your kid can ride for $2 a time and go round and round on a horse with an odd expression. Check it out at: http://janescarousel.com/.

The whole area has been redeveloped so that you can sit along the water front and admire the Statue of Liberty some way off in the distance; watch the helicopters flittering about taking tourists for expensive trips to see the great lady and watch the boats of all shapes and sizes make their way up and down the East River. It’s a lovely way to spend an afternoon, but only when it’s hot.

Walking along the Brooklyn Bridge has been on our to do list for a while, inspired by Miranda meeting Steve on it in a key episode of Sex and the City. Well, I was inspired, but I digress. And even though we were directly under it (and it is huge), we struggled to find the Brooklyn end of it. It just seems to go on forever. We could see the pedestrians on it, we could see the cars but we couldn’t figure out how to get on the damn thing. We keep walking along the side of it, traffic fumes mixing well with the heat of the day and eventually find a tiny set up stairs off a dank pathway underneath the bridge.

And because we had chosen a busy weekend to visit, it was packed. The pedestrian walkway is separate and above the road for the cars and you have to share it with cyclists. It’s a fine line between trying to pass the slowest, photograph taking tourist and not getting mown down by a crazy cyclist as they speed along their half of the pavement. And it doesn’t help that someone decided to wrap half the bridge in plastic, so you can’t even see the views most of the time. And did I say it was long? Yes, it’s very long at 1.1 miles or 1.8 km. No wonder it took 13 years to build it in the late 19th Century. And no, there is no crock of gold at the end.

Sex and the City first aired in June 1998 and I think I have seen every single episode and most of them many times.  Watching it in New York should be perfect. I am used to fast forwarding through ad breaks using Sky+, but 3 in 30 minutes, so short that my new Tivo remote (ah yes, a return to Tivo – bigger here than in the UK, where I think we were the only users until they cancelled the listings and forced us on to Sky) can’t stop quick enough and I constantly have to back up. The show starts with a ticker tape running across the bottom of the screen, telling me about stars and their babies/divorce/affair and it is very distracting. Bizarrely the credits for the show display at top speed on the bottom left of the screen, what’s that about? And the episode I have recorded cuts off 30 seconds before the end, so I have to play the start of the next one to see the end. Then it cuts straight into the next episode with no break. Aghhh. It isn’t perfect, but on the ridiculously large TV that R bought, it’s a great way to see New York.