Today seems to be mostly about Black Friday. Not a concept that exists in the UK, but in the US, Black Friday is huge. It’s a massive selling day where shops offer large discounts to entice shoppers in after a day of stuffing themselves with turkey. I suppose it’s a bit like Boxing Day, the day after Christmas Day, in the UK. Although I don’t think Boxing Day is quite the shopping mecca it once was.

In my New York Times this morning, there were 18 separate pieces of advertising making the newspaper bundle on my doorstep super thick. Here’s what it looked like: this is Black Friday on Thanksgiving. 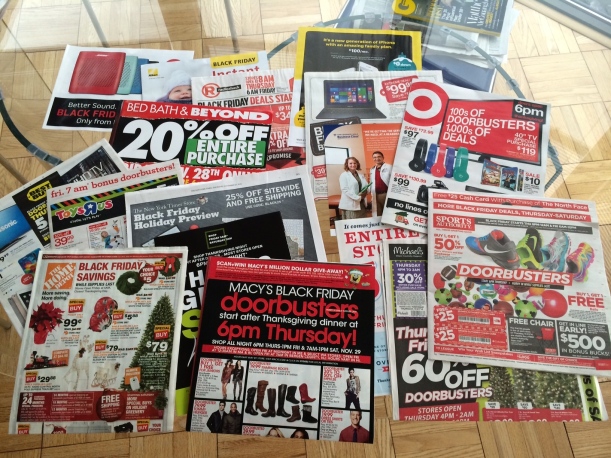 For those who read my earlier post and thought ‘hey, that’s kind of odd, plastic surgery for dogs’. It’s actually an advert for a  comedy programme called the Kroll Show. Funny thing is, you could really think this was true here in New York.

Sex and the City first aired in June 1998 and I think I have seen every single episode and most of them many times.  Watching it in New York should be perfect. I am used to fast forwarding through ad breaks using Sky+, but 3 in 30 minutes, so short that my new Tivo remote (ah yes, a return to Tivo – bigger here than in the UK, where I think we were the only users until they cancelled the listings and forced us on to Sky) can’t stop quick enough and I constantly have to back up. The show starts with a ticker tape running across the bottom of the screen, telling me about stars and their babies/divorce/affair and it is very distracting. Bizarrely the credits for the show display at top speed on the bottom left of the screen, what’s that about? And the episode I have recorded cuts off 30 seconds before the end, so I have to play the start of the next one to see the end. Then it cuts straight into the next episode with no break. Aghhh. It isn’t perfect, but on the ridiculously large TV that R bought, it’s a great way to see New York.